Skip to content
There is no life without music. There is no music without a Moxy

Call To Schedule a Visit!

For more than 10 years, Anthony has been building custom guitars for himself and other artists. Anthony has a passion for custom builds and will continue matching the right guitar with the right guitarist. Each Moxy Guitar is a unique, high-end custom instrument designed by a professional player who knows the importance of the guitar being right in every way.

Anthony Gemignani dreamed of being a rock star from age 10. He started studying guitar at age 11 through private lessons in his hometown of Wilmington, DE. He knew he’d have to leave Delaware to pursue his passion for music. So, he attends one of the world’s best music schools, Berklee College of Music in Boston, where he graduated in 1994.

After graduation, Anthony performed professionally for many years in Boston and NYC as a studio musician and live performer. He shared the stage with many of New York’s finest talent across many venues in the city. Anthony began touring nationally and internationally as a guitarist for many different artists and bands.

He’s performed with members of Jimi Hendrix, Prince, Billy Joel, Beach Boys, Fleetwood Mac, and many, many more. He’s worked on scores for movies, TV shows, and even an off-Broadway play. 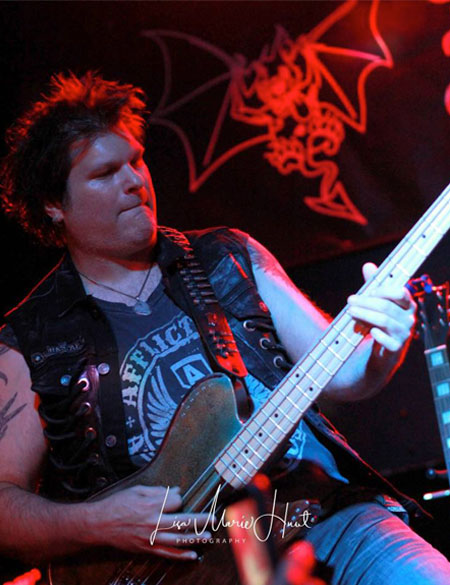 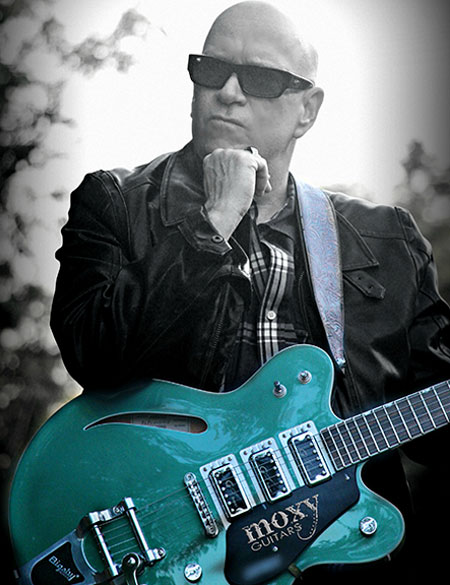 Jose is a guitarist and avid admirer of fine guitars with a 30-year background in corporate marketing, sales, management, and consulting. Basically, he’s the perfect storm for developing a premier guitar company. Jose partnered with Anthony Gemignani, his guitar mentor, to develop and expand Moxy Guitars. His vision is to make Moxy a leader in the industry of guitar design and custom building.

In the late 1960s, Jose and mother moved from Cuba to New Jersey to reunite with his father. Throughout high school and college, Jose developed a passion for film and science. He attended Fairleigh Dickinson University as a pre-med student. But, in the end, he decided not to pursue a medical career, nor film. Instead, he joined the pharmaceutical industry! As his career progressed, Jose successfully led improvement initiatives within US and global markets. He’s traveled the world, continuously exceeding goals and optimizing market share. He has even had the honor of receiving the Employee of the Year award in his latest retail venture.

Through all the corporate work and public speaking, Jose remains an avid aficionado of music and film. He devotes time to acting classes and guitar lessons to keep his passion alive. He follows Jack White’s style of guitar playing and aspires to one day play guitar like Jimi Hendrix, B.B. King, and Anthony Gemignani.

Jose remains close to his Cuban roots. He is tri-lingual (English, Spanish, and Portuguese). He has been married to Maria Elena Suros for 40 years, and they both dance a mean Salsa. They have four beautiful children and a granddaughter. But the real boss of the family is Snowy, the Bichon-Frise.

Sophia Urista is a singer, songwriter, and actor. She is the lead singer of Rebel and The Titan. She is also the recurring frontwoman for the 9-piece brass band Brass Against. Under the guidance of coach Miley Cyrus, Sophia reached the Top 20 for season 11 of The Voice. Her musical talent was featured in the 2014 action thriller John Wick. She starred as Beth in the 2018 film Love Magical and played Golden Devine in Salesmanship (2016).

A Detroit native, Sophia moved to New York City at age 21 with $700 in her pocket and a bachelor’s degree from the University of Michigan. After singing at open mics and karaoke contests for a year, she joined the house band at The Sugar Bar in uptown New York. Through mentorship from Quincy Jones and Ashford & Simpson, Sophia began her solo career. She also hosts and performs at the Afropunk Music Fest in Brooklyn. Her musical influences include Betty Davis, Led Zeppelin, Dolly Parton, Tina Turner. 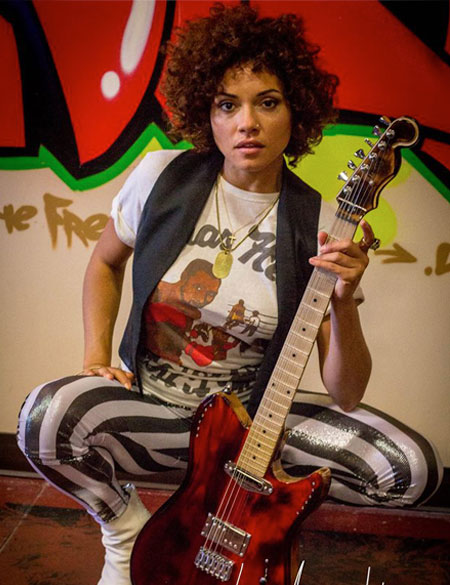 Moxy guitars are my favorite guitars around. The sound and style each one have are unmatched to any other company; hard when you need it, clean and smooth at a moment’s notice. Definitely a staple in my guitar collection!
Eren CannataEmmy Award Winner & Stash Productions 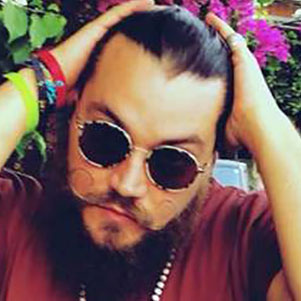 I’ve become a better beginner guitar player in record time by the mere fact that I can’t WAIT to play my baby blue Drive Series Moxy guitar. The comfort is only matched by the beautiful maple neck with rosewood fretboard. I feel like a rockabilly goddess when I play. I even named her Wanda Jackson.
Sophia UristaNYC Artist and finalist on the Voice. 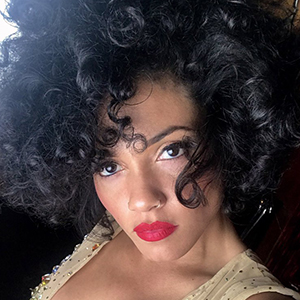 I’ve become a better beginner guitar player in record time by the mere fact that I can’t WAIT to play my baby blue Drive Series Moxy guitar. The comfort is only matched by the beautiful maple neck with rosewood fretboard. I feel like a rockabilly goddess when I play. I even named her Wanda Jackson.
Mike ThomasPierced 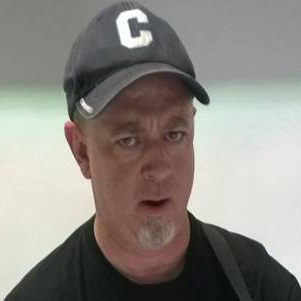 Moxy Guitars are always set up and ready to play at Cove City Sound Studios. They have been used by many of our clients and everyone loves them. They sound great!
Richie CannataCove City Sound, Billy Joel, Beach Boys 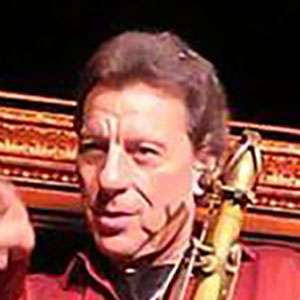 I have played many guitars over the years. Moxy Guitars are absolutely hands down the best guitars I have ever played. The necks are like butter, the pickups can pump out tones from Pristine Crystal Cleans to Insane Distortion roar with an incredible amount of sustain. These guitars are not just incredible instruments, they are Pieces of Art
Joey TeesStella and the Voodoo Fish 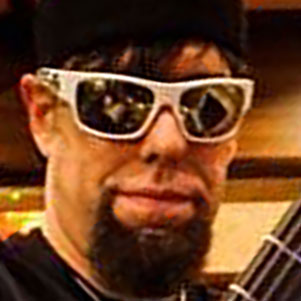 ABOVE AND BEYOND... So.. they put my dad in my guitar. Literally. I sent them my dad’s ashes and they used them in the finish and also incorporated a hidden vessel in the body to store the “remains of the remains”. Now my pops is with me every time I play. This is the one “thing” I own that I can genuinely say brings true happiness to me. Oh, and the guitar sound. Let’s just leave it at “it plays f-ing great”.
Dustin MayerProfessional Guitarist 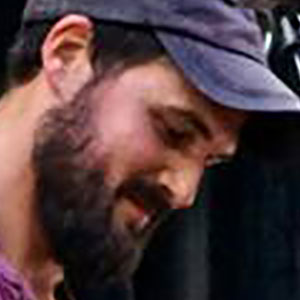 My Moxy Red Rocker Strat has the feel of a 69 necks back contour, which I love! The look is great, The color is great. And for those who want a supercharged strat....the Pickups are Awesome! Love the bite and the tone on this Axe. Kudos to the boys at Moxy!!! THANKS GUYS – Ken Cino
Ken CinoProfessional Guitarist 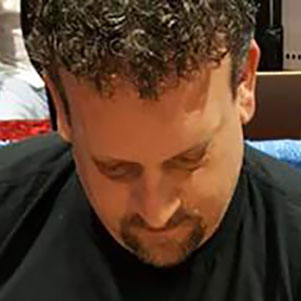 ME Tuscany is awesome. She is rad and the pickups are really cool. Super Clean
Justin DerricoPink, The Voice 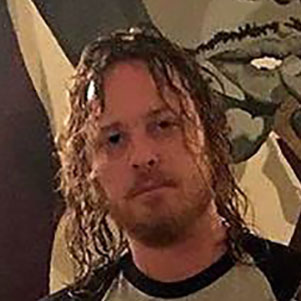 Got to have a Moxy?